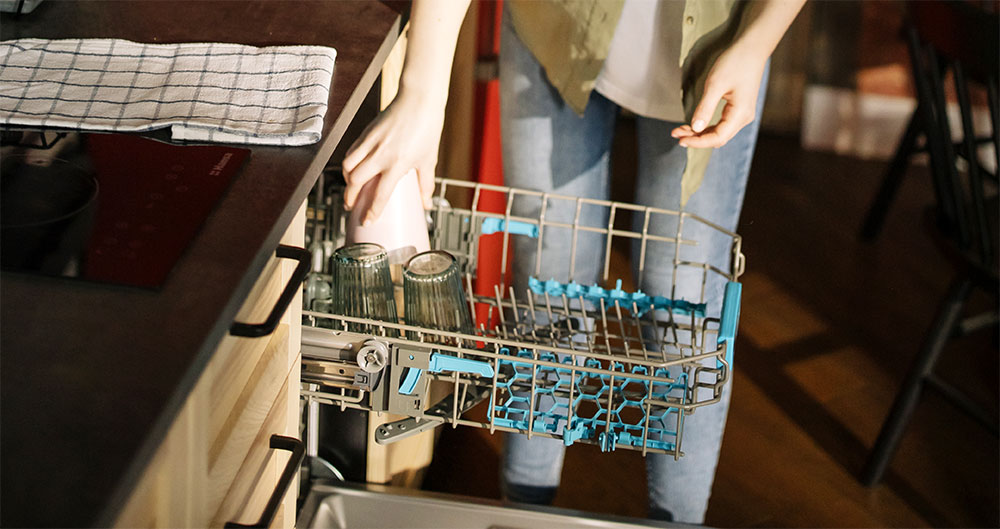 There are several types of dishwasher detergents available on the market, but which kind really cleans the best? Believe it or not, the answer’s complicated and depends on factors, like your personal cleaning method and the type of dishwasher you own. Keep reading to learn about the pros and cons of different dishwashing agents, and to learn how you can even make dishwashing powder at home.

There are three overall types of dishwasher detergent: a single-load style that comes in tablet or pod/pac form, liquid gels, and powders. You might think of these detergent types in terms of evolving technology. Powders are the old school dishwashing solution, liquid gels are fairly modern, and tablets are the newest kids on the block.

The most common type of dishwasher detergent available today is the dishwashing tablet. You’ll also see these referred to as pacs (short for packets), pods, and pouches. These are single-load detergents, where the detergent is contained in a dissolvable polymer. You pop them into your dishwasher, and they’re used up in a single wash cycle.

Unlike powders—and to a greater degree than dishwashing gels—dishwashing pods contain multiple additives that take the cleaning process to a whole new level. They’ll pre-treat and de-grease your dishware and cookware, and they may even contain additives like mild bleach or rinsing aids that will give your plates and glasses a clean shine. 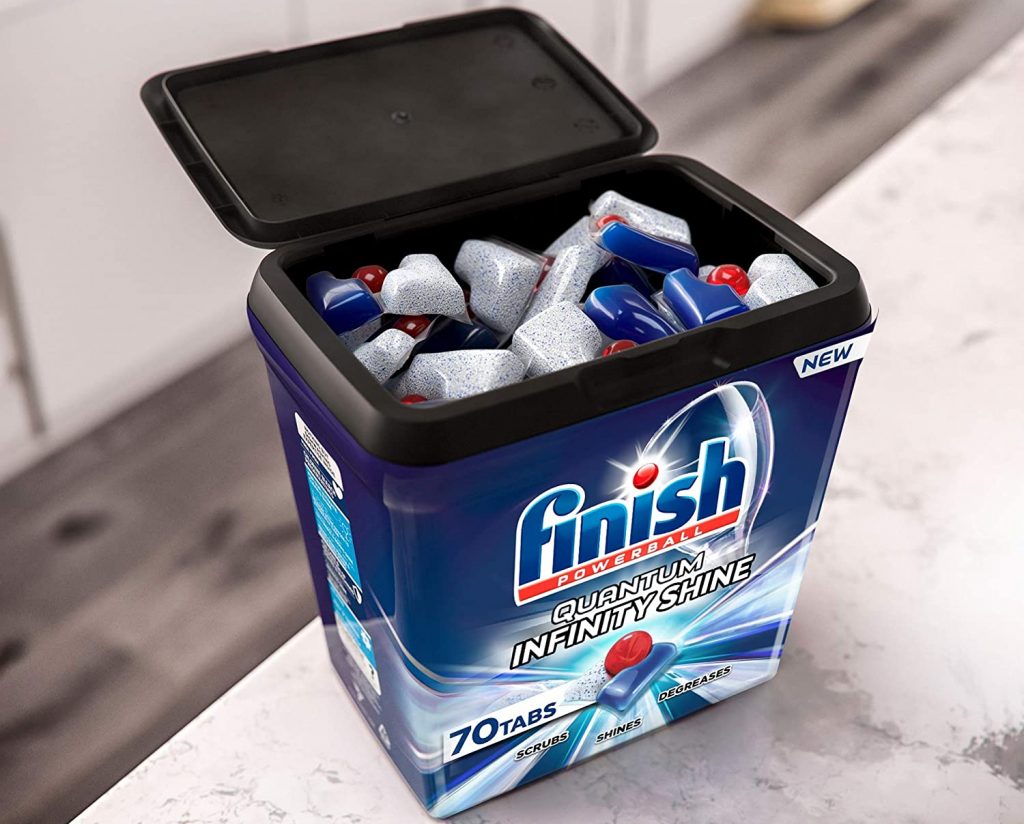 In testing, Consumer Reports has found single-load dishwashing detergents are some of the best at cleaning, but they’re also more expensive, costing 10-36 cents per load.

Dishwashing tablets may not work well for everyone

You’ll find many dishwasher’s detergent dispensers are actually designed with wash cycles in mind, instead. That’s important, because ultimately a tablet has no way it can support cycles. It fits into one dispensing slot, is immediately or eventually released into the dishwasher, and it is only used when hot water can dissolve it. In other words, these aren’t great for wash cycles, and if your hot water heater takes a long time to heat water, the earliest parts of your dishwasher’s wash cycle will merely use water to clean your dishes. 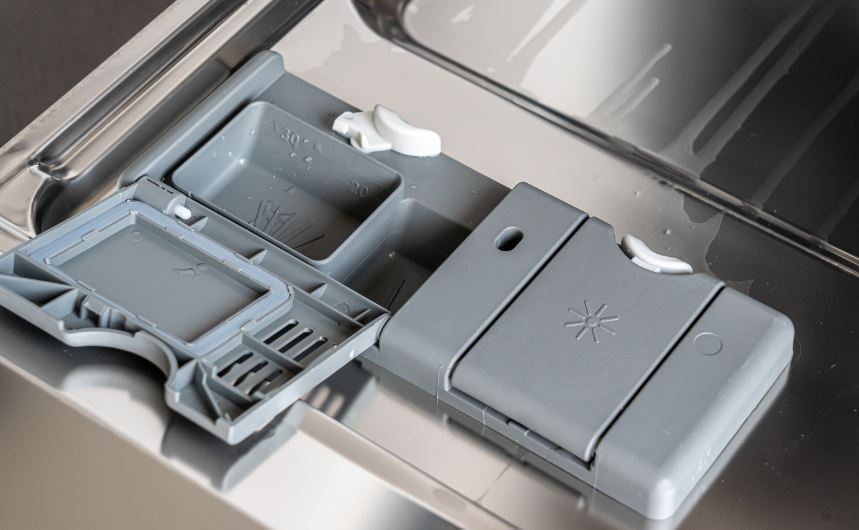 Chances are dishwashing tablets will work well for you. If nothing else, they use more and harsher additives to make up for potential downsides. But if you find they disappoint you, don’t go back to washing dishes by hand. Simply try gels or powders instead. And respect your dishwasher’s wash cycles. They’re designed that way for a reason.

This category of dishwasher detergent is broad and includes liquid gels you can use directly in your dishwasher and liquids you hand wash dishes with—a.k.a., good old dish soap).

Dishwashing gels made for the dishwasher are like pods or tabs, in that they often contain multiple additives. You squirt the recommended amount into your dishwasher’s designated dispenser. Because of their harsher cleaning additives, you should rinse your hand off if your skin comes into contact with dishwashing gels. 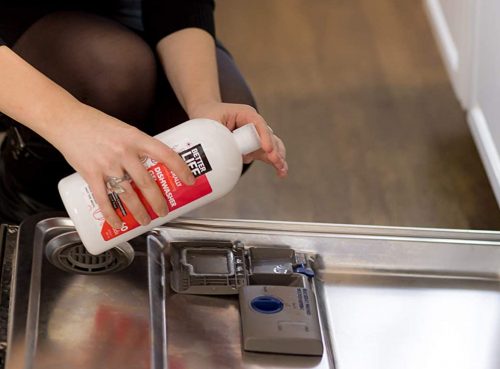 In terms of modern dishwasher solutions, liquid gels are much cheaper than pods, costing a mere 5-11 cents per load, but their quality varies in testing. As gels tend only to contain one or two additives, they often can’t hope to match the performance of dishwashing tablets, but most will outperform powders.

Is there a difference between dish soap and dish detergent?

Dishwashing detergents contain harsher cleaning additives that shouldn’t come into prolonged contact with skin, but are perfect for your dishwasher.

Meanwhile, dish soap is a type of harsh hand soap made with surfactants that produce foamy suds to help break down and remove oils as you scrub your dishes by hand. The soap is harsh enough to help with cleaning dishes (or other areas of the home!), but gentle enough that it should not harm your skin too badly, especially if you use a little lotion after washing your dishes. 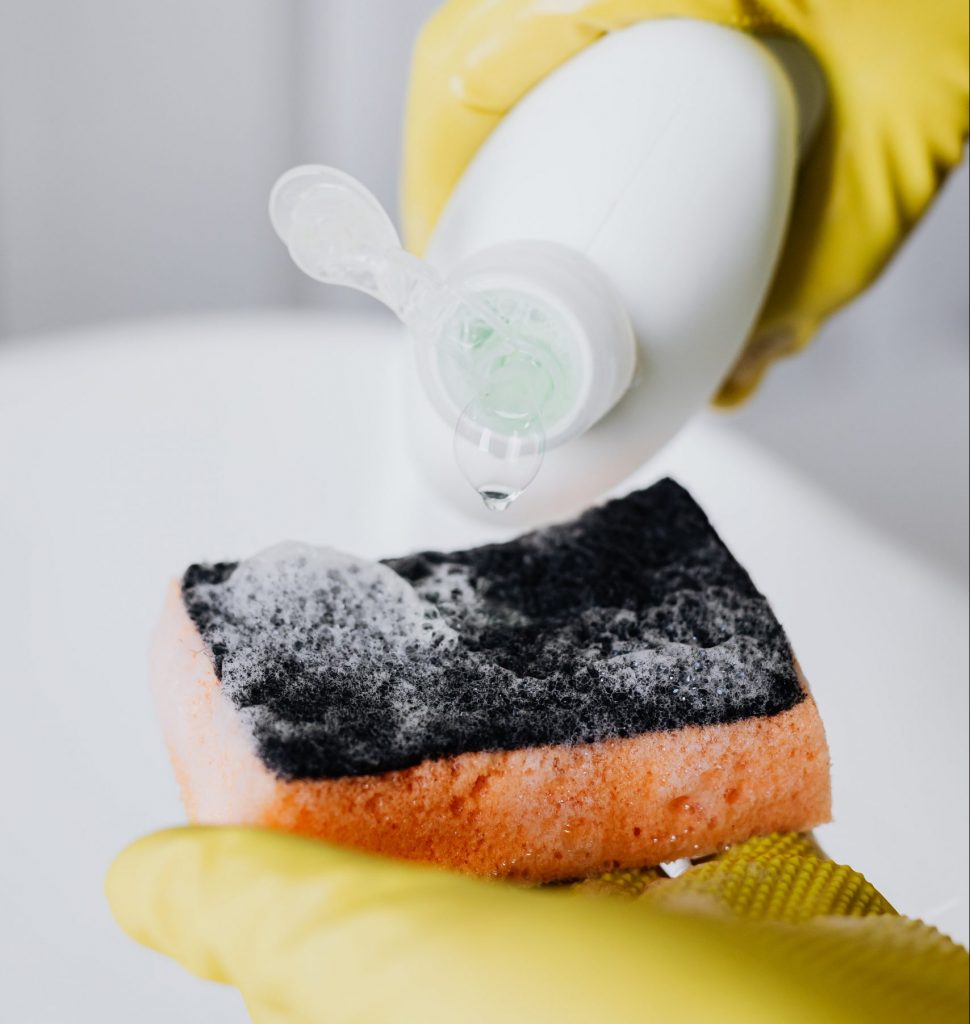 The two should not be used interchangeably. With more than just a few drops of dish soap, suds can and likely will expand and burst out of the edges of your dishwasher if you try to substitute one for the other. This can damage your dishwasher and flooring. Don’t do it!

With tablets and pods rising in popularity, dishwashing powders have greatly fallen out of favor—so much so that Consumer Reports didn’t even bother to include powders in their latest round of dishwasher detergent testing in 2020. In past tests, though, powders have done well enough, though some struggle to clear cooking grime from pots and pans.

But are powders really all that bad? Sure, this is the dishwashing detergent your parents used, but really, it’s just simple. And it’s not like powders (or gels) aren’t at the core of most dishwashing tablets themselves. So maybe cheapest really is best—provided you use it well.

For best results, couple these with a rinse aid and respect your dishwasher’s pre-wash cycle (if it has one) by using a little extra powder in that part of your dispenser or in the dishwasher body.

How to make homemade dishwashing powder

Because there’s not much to a dishwashing powder, you can, in theory, make your own at home. Just know that chemicals combined in the home aren’t necessarily anymore “natural” or better for the environment than chemicals formulated outside the home. And if you put together a bad combination, it could be dangerous or corrode parts of your dishwasher.

Luckily, homemade dishwashing powder isn’t too difficult to whip up. All you need is washing soda (sodium carbonate), epsom salts (magnesium sulfate), and borax (sodium tetraborate). Watch the video below to learn how it’s done.

How to get the most out of your dishwasher

Getting spotless dishes from your dishwasher isn’t only about the types of dishwasher detergent you use. It’s also about how you load your dishes, use your dishwasher, and what sort of water flows through your machine.

Most modern dishwashers have sensors that detect just how dirty the water inside them is as they clean. If they detect the water isn’t that dirty, they assume your dishes are cleaner than they actually are and may very well shorten the wash cycle to conserve water.

On the one hand, this is great. It’s environmentally friendly and one of the biggest reasons dishwashing machines use less water than washing dishes by hand. So, when you pre-rinse your dishes before putting them in the dishwasher, you’re more likely to end up with dirty dishes—and ultimately not conserve water as you probably will have to follow up with hand washing certain items.

What you should do before putting your dishes into the dishwasher is scrape off any large bits of food, especially from stainless steel pots and pans.

Use your dishwasher the way the manufacturer recommends

If your freshly cleaned dishes look spotty, chances are you have hard water. Check to make sure your detergent contains a good sodium base, like Finish’s Powerball Tabs or Cascade’s Platinum ActionPacs, as this will help soften the water during cleaning.

Using a rinse aid will further prevent spotting. Even if you use a dishwashing pod that has a rinse aid, a separate, independent rinse aid will do a better job. Or learn to live with a few spots! They’re not harming anyone.

Beware enticing detergent packets if you have small children

If you’re a parent to a small child who has a habit of getting into things, you might want to be especially careful with any dishwasher detergent that comes in enticing shapes or designs that small children might mistake for being edible.

From January 2013 to December 2014, U.S. Poison Control Centers received more than 60,000 calls after young children were exposed to washing detergents. While laundry detergent was more likely to result in Poison Control recommending evaluation or treatment at a hospital, obviously no detergent should be consumed. Dishwasher tablets can also easily cause corneal injuries when mishandled by children.

This is, of course, no reason not to get the detergents your home needs, but make sure to store them away in childproofed drawers or cabinets. In the event your child becomes exposed to a detergent, call Poison Control at 1-800-222-1222. Trouble hearing or speaking? No problem. You can also get help via an online tool.

Tired of thinking about it? We’ve got you covered. 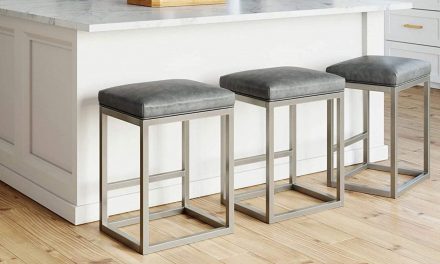 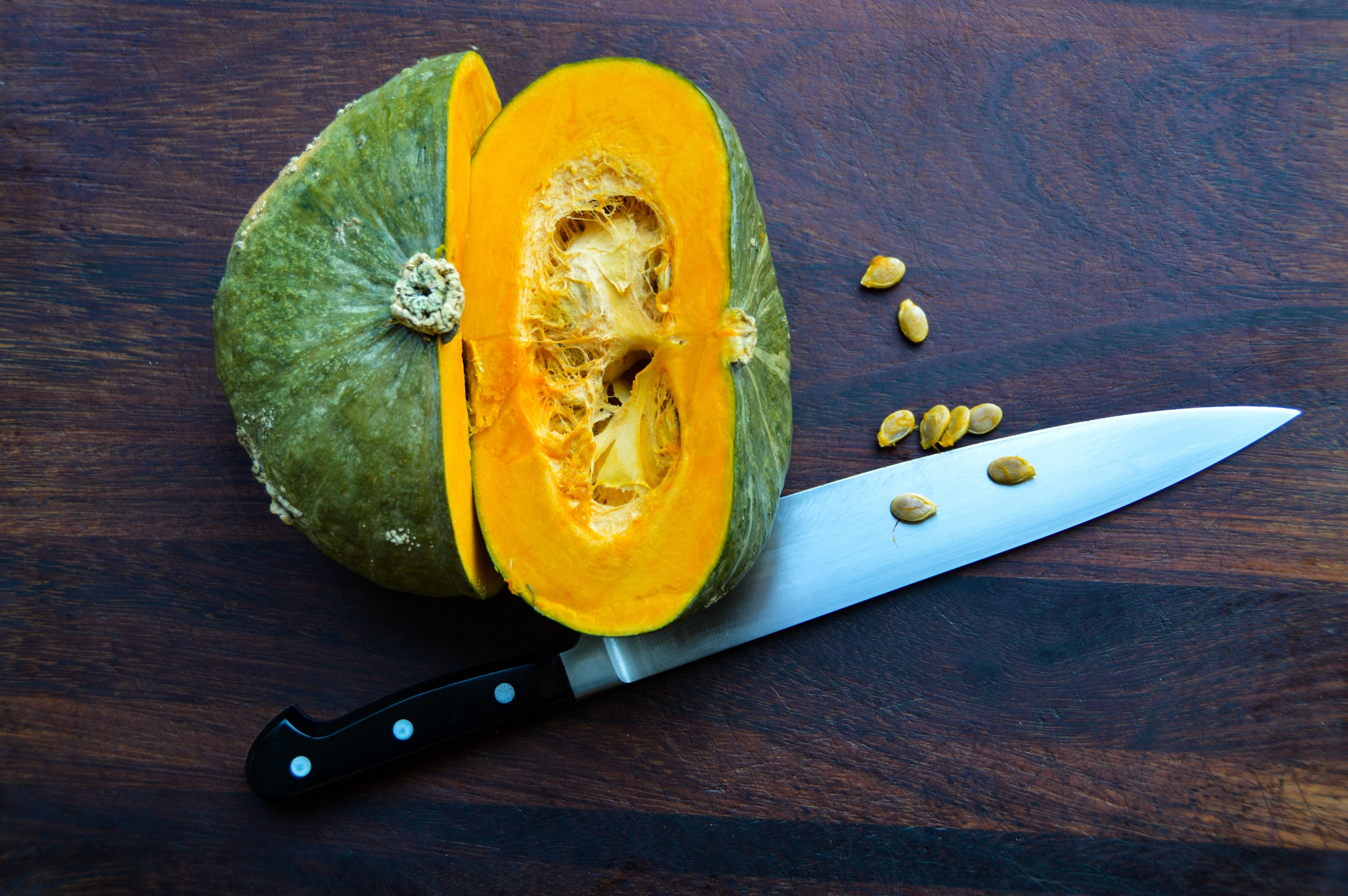 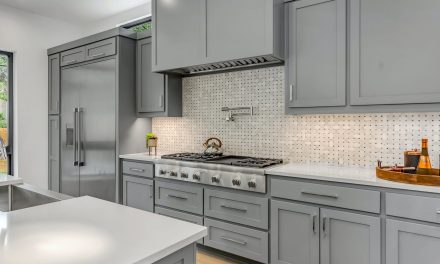 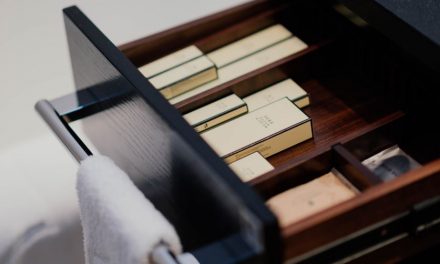